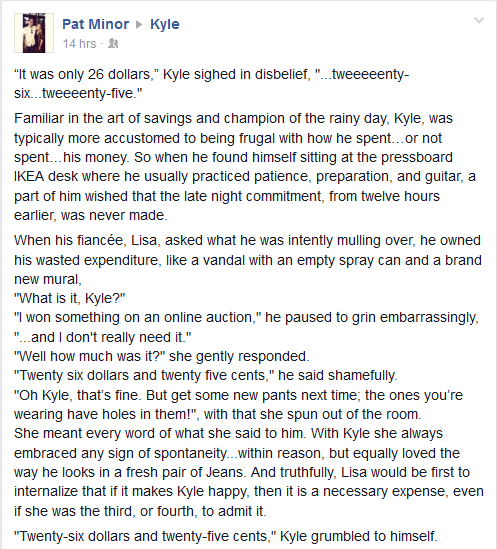 “It was only 26 dollars,” Kyle sighed in disbelief, "...tweeeeenty-six...tweeeenty-five."

Familiar in the art of savings and champion of the rainy day, Kyle, was typically more accustomed to being frugal with how he spent…or not spent…his money. So when he found himself sitting at the press-board IKEA desk where he usually practiced patience, preparation, and guitar, a part of him wished that the late night commitment, from twelve hours earlier, was never made.

When his fiancée, Lisa, asked what he was intently mulling over, he owned his wasted expenditure, like a vandal with an empty spray can and a brand new mural.
"What is it, Kyle?"
"I won something on an online auction," he paused to grin embarrassingly, "...and I don't really need it."
"Well how much was it?" she gently responded.
"Twenty-six dollars and twenty-five cents," he said shamefully.
"Oh Kyle, that’s fine. But get some new pants next time; the ones you’re wearing have holes in them!", with that she spun out of the room.
She meant every word of what she said to him. With Kyle she always embraced any sign of spontaneity...within reason, but equally loved the way he looks in a fresh pair of Jeans. And truthfully, Lisa would be first to internalize that if it makes Kyle happy, then it is a necessary expense, even if she was the third, or fourth, to admit it.

"Twenty-six dollars and twenty-five cents," Kyle grumbled to himself. 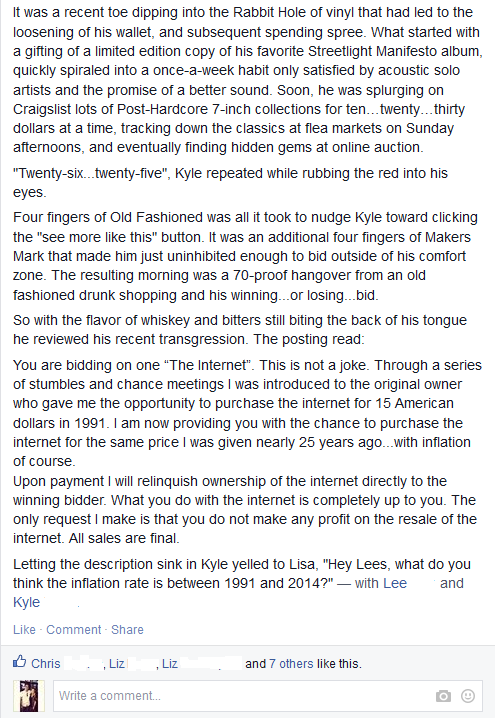 It was a recent toe dipping into the Rabbit Hole of vinyl that had led to the loosening of his wallet, and subsequent spending spree. What started with a gifting of a limited edition copy of his favorite Streetlight Manifesto album, quickly spiraled into a once-a-week habit only satisfied by acoustic solo artists and the promise of a better sound. Soon, he was splurging on Craigslist lots of Post-Hardcore 7-inch collections for ten…twenty…thirty dollars at a time, tracking down the classics at flea markets on Sunday afternoons, and eventually finding hidden gems at online auction.

"Twenty-six...twenty-five", Kyle repeated while rubbing the red into his eyes.

Four fingers of Old Fashioned was all it took to nudge Kyle toward clicking the "see more like this" button. It was an additional four fingers of Maker's Mark that made him just uninhibited enough to bid outside of his comfort zone. The resulting morning was a 70-proof hangover and his winning...or losing...bid.

So with the flavor of whiskey and bitters still biting the back of his tongue he reviewed his recent transgression. The posting read:

You are bidding on one “The Internet”. This is not a joke. Through a series of stumbles and chance meetings I was introduced to the original owner who gave me the opportunity to purchase the internet for 15 American dollars in 1991. I am now providing you with the chance to purchase the internet for the same price I was given nearly 25 years ago...with inflation of course.
Upon payment I will relinquish ownership of the internet directly to the winning bidder. What you do with the internet is completely up to you. The only request I make is that you do not make any profit on the resale of the internet. All sales are final.

Letting the description sink in Kyle yelled to Lisa, "Hey Lees, what do you think the inflation rate is between 1991 and 2014?"

Posted by PWalshMinor at 9:13 AM No comments:

About two years ago an X-box controller had gone missing - a group of friends joked about what had happened to it. This is the first Freelance Fable. 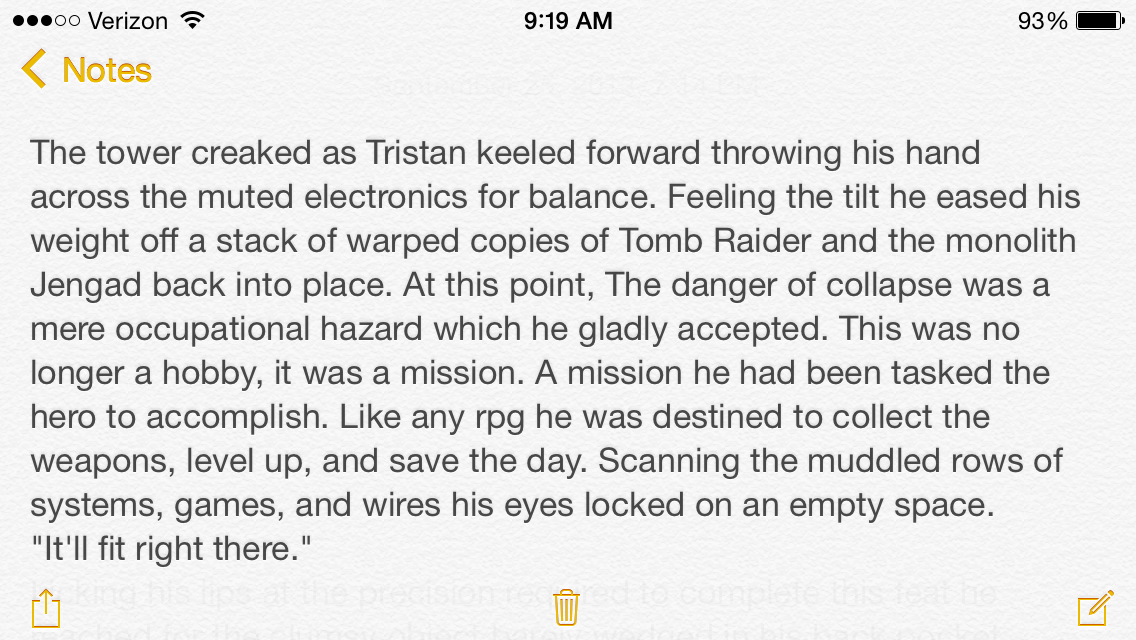 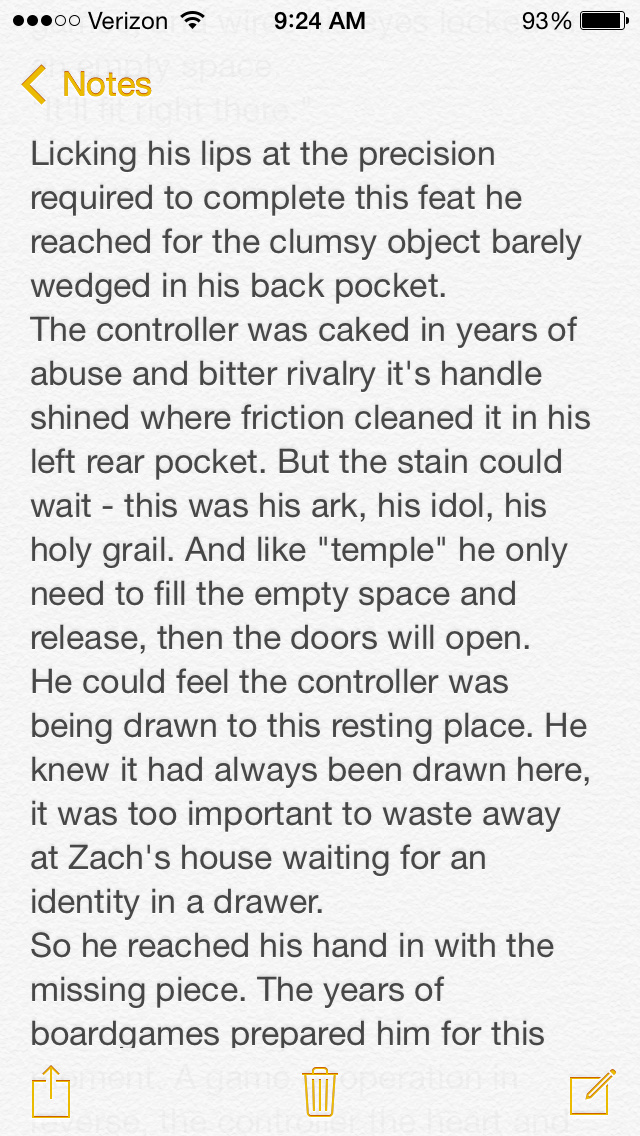 Tristan keeled forward, throwing his hand across the rows of muted electronics, scanning for balance. Sliding his fingers from twelve to five across a bunched Power-Pad he could feel the spire begin to tilt. The danger of collapse was a mere occupational hazard - which he gladly accepted.


This was no longer a hobby, it was a mission. A mission that he had been tasked the hero to accomplish. Like any playable character, in any R.P.G, he was destined to collect the weapons, level up, and save the day.

Scanning the muddled rows of systems, games, and wires - his eyes locked on an empty space.

"It'll fit right there," he exposed his plan to the empty room, and eased his weight off a stack of warped copies of Tomb Raider and the monolith Jenga-d back into place.

Licking his lips at the precision required to complete this feat he reached for the clumsy object barely wedged in his back pocket. The controller was caked in years of abuse and bitter rivalry its handle shined where friction cleaned it in his left rear pocket. But the stain could wait - this was his ark, his idol, his holy grail. And like "Temple" he only need to fill the empty space, grab, release, and the doors will open. 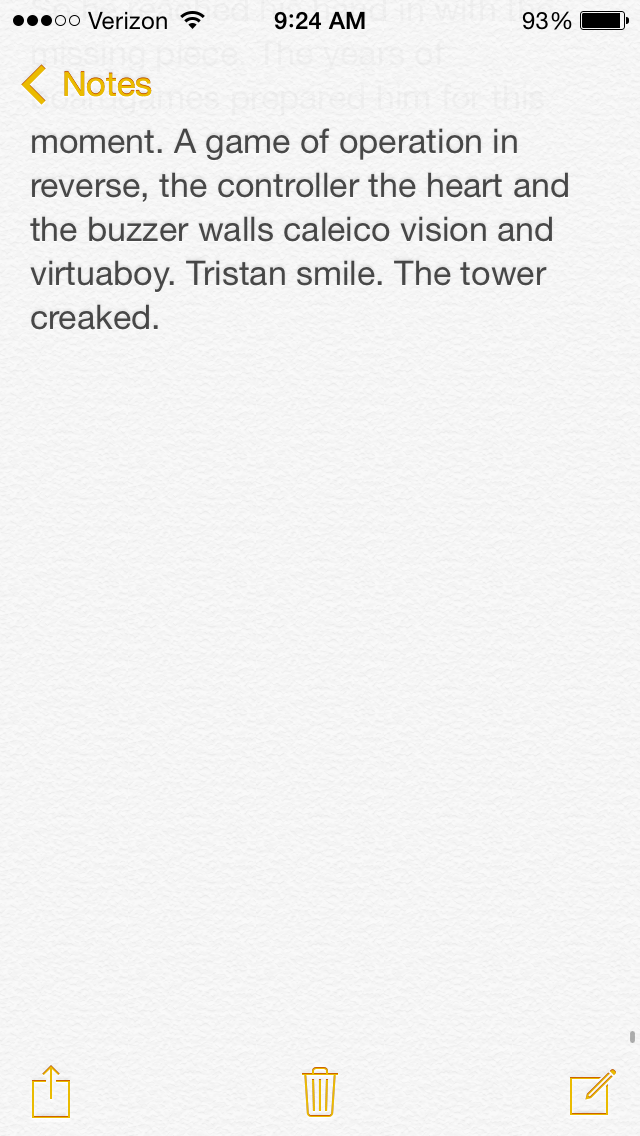 He could feel the controller was being drawn to this resting place. In a way he knew it had always been drawn here; far too important to waste away in a drawer at Zach's house waiting for the stimulation of a fevered midnight game of MVP.

Reflecting on this thought he spoke aloud, "When they see...everyone will understand...this means something." And with this final Richard Dreyfuss-like consideration, he reached his hand in; thrusting the missing piece toward completion of his masterpiece.

The years of boardgames prepared him for this moment. A game of operation in reverse, the controller: the heart, and the buzzer walls: a CalecoVision and a Virtual Boy.

Posted by PWalshMinor at 11:10 AM No comments:

The Peace of Cake 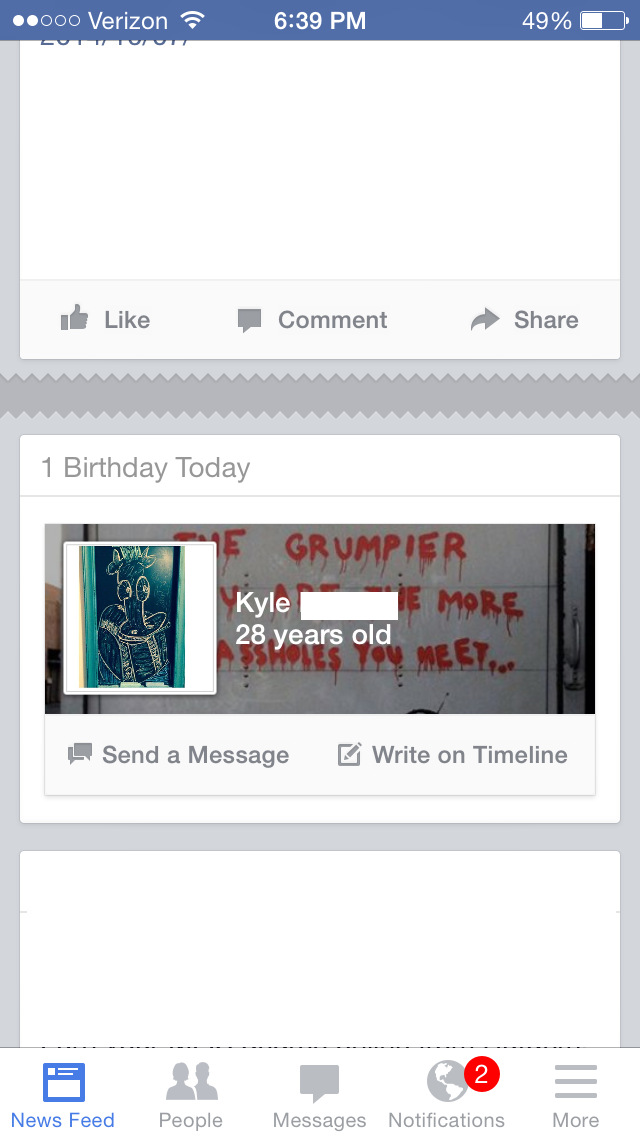 “Vanilla”, Kyle responded, providing the desired flavor for the icing on his birthday cake. 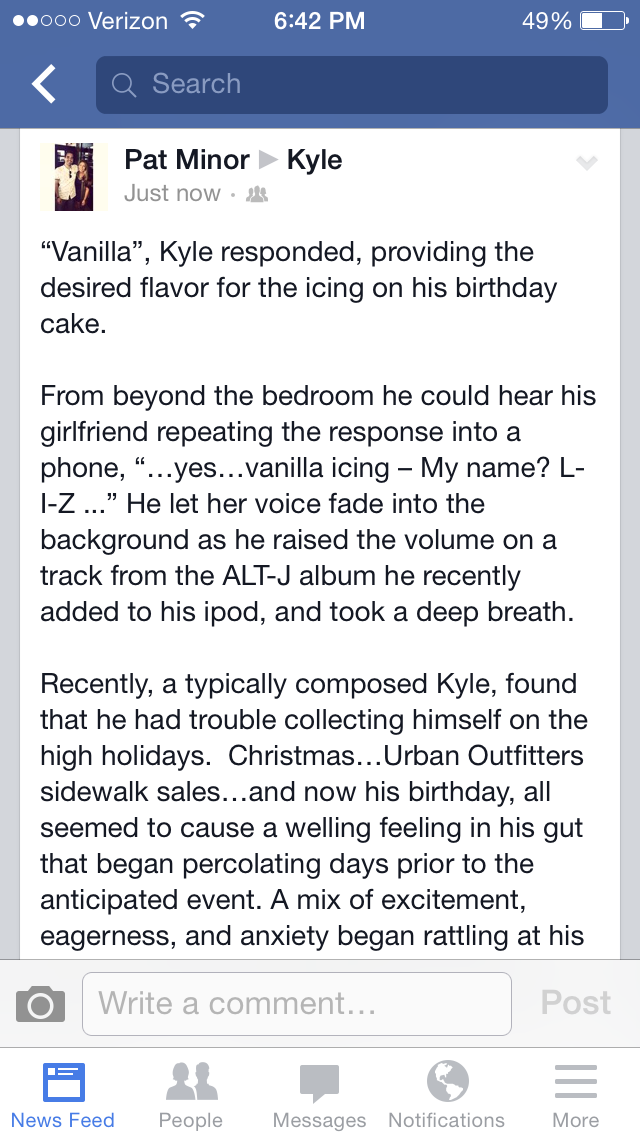 From beyond the bedroom he could hear his girlfriend repeating the response into a phone, “…yes…vanilla icing – My name? L-I-Z ...” He let her voice fade into the background as he raised the volume on the ALT-J cassette he recently purchased, and took a deep breath.

Recently, a typically composed Kyle, found that he had trouble collecting himself on the high holidays. Christmas…Urban Outfitters sidewalk sales…and now his birthday...all seemed to cause a welling feeling in his gut that began percolating days prior to the anticipated event. A mix of excitement, eagerness, and anxiety began rattling at his knees and tickling the back of his neck like an ill-advised leap into a pool of Rook iced coffee. 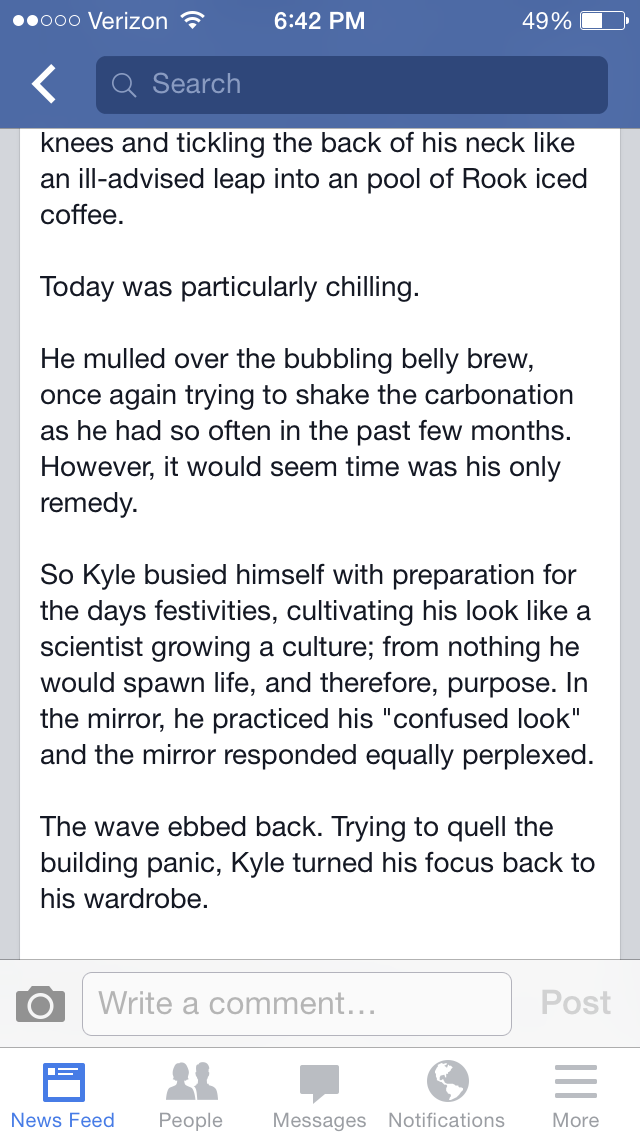 He mulled over the bubbling belly brew, once again trying to shake the carbonation as he had so often in the past few months. However, it would seem time was his only remedy.

So Kyle busied himself with preparation for the days festivities, cultivating his look, like a scientist growing a culture;  bringing together fabrics he would spawn technicolor life, and therefore, purpose. The mirror served as a microscope, where he analyzed his Petr-dish and his practiced "confused look". The resulting cellular growth responded equally perplexed.

The frozen wave ebbed back. Trying to quell the building panic, Kyle turned his focus back to his wardrobe. 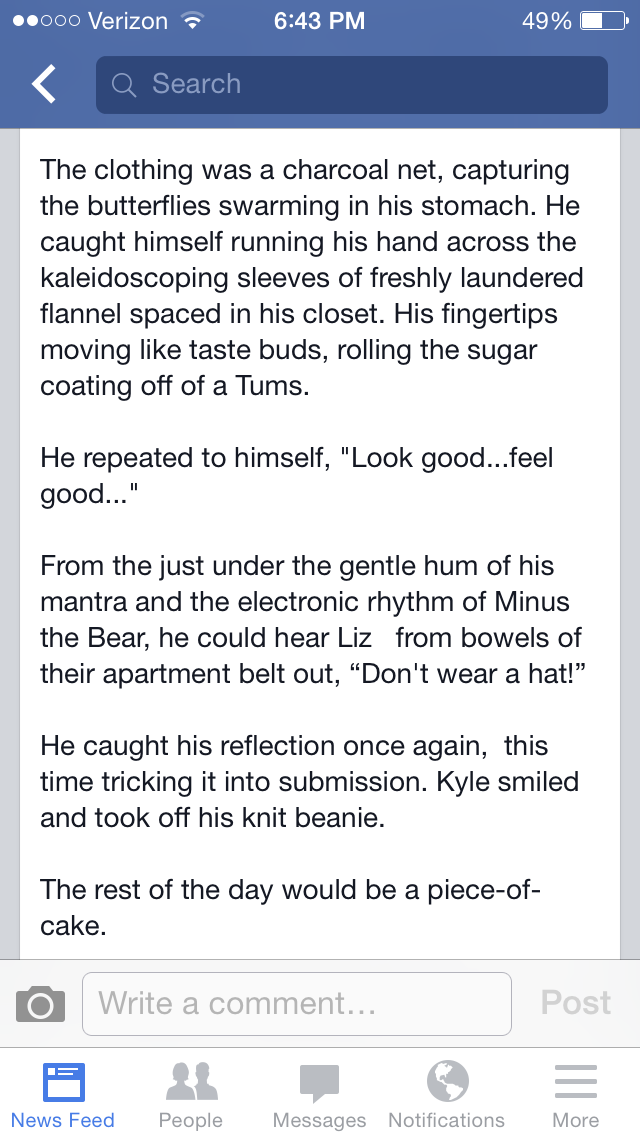 The clothing was a net made of charcoal, capturing the butterflies swarming in his stomach. He caught himself running his hand across the kaleidoscoping sleeves of freshly laundered flannel spaced in his closet. His fingertips moving like taste buds, rolling the sugar coating off of a Tums.

He repeated to himself, "Look good...feel good..."

From the bowels of their apartment, just under the gentle hum of his mantra and the electronic rhythm of Minus the Bear, he could hear Liz belt out, “Don't wear a hat!”

Everything buzzed into focus. He caught his reflection once again, this time tricking it into submission. Kyle smiled and took off his knit beanie.

The rest of the day would be a piece of cake.