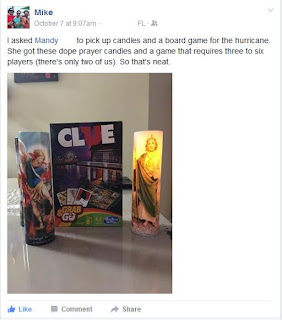 Mike was confused and Amanda knew it.
"We are having guests!" Amanda said, her voice drifting from the bathroom at back of their apartment.
"Guests?" Mike returned, his accompanied sigh caught the wake of Amanda’s suggestion between the fridge and the counter, where Amanda had arranged couple board games. Among the board games were several bottles of vinegar and two armfuls of tall glass candles, each displaying religious icons and a language somewhere in between Spanish and Japanese.
"I got them at Target...they were on sale!" Amanda offered in her most bubbly tone.
"Uhm...Target sells candles?"
"UHM...Target sells everything," Amanda retorted, playfully grinning from around the corner.
Mike scanned the games and saw a "3-6 players" logo presented clearly on the bottom of the box.
He muttered to himself, "Guests? Huh?"
On their own, Clue and Monopoly are not an issue. In fact, Mike wanted to play board games, he likes board games. He can think of specific situations, during phone calls and in group chat conversations, where he made it a point to inform interested, and uninterested, parties how much he enjoyed the time spent around a tabletop with his wife. In these moments, he would point out how adept she is at finding a weakness in her opponent’s strategy, and how he loved her particular penchant for drawing out the torture of losing in every single game. For him it is a dance, but as with all dancing, three is a crowd of people stepping on each other’s feet. And while Mike isn't sure if he is a masochist, he is sure he doesn't want to dance with anyone else. Especially, someone who may or may not be trapped with them over the fallout of a hurricane that meteorologist are already calling "catastrophic."
With his interests at near full peak, Mike began rolling through the many questions he had:

How many guests are coming?
Who are these guests?
Why are they staying here?
When was she going to tell me?

Instead, the only words that came out were, "What's with all the vinegar?"
Amanda, already behind him, responded in a whisper, "That's if they get thirsty."
Mike spun around drooping his ear to his to his shoulder, trying to press the tickle that was crawling deep into his ear drum and tingling down his neck.
"JESUS...where the hell did you just come from...Don't sneak up on me like that!" He whelped. Smiling and unphased Amanda stood, statuesque. Her eyes, steady pins of dark-midnight at the end of long dark tunnel.
He continued, "Are you alright...you look...well great, but what is with the baby powder?" Noticing her face and arms dusted in a white substance.
"Oh no...That’s sage," Amanda said tilting her head gently.
"They had it at Target?" Mike asked.
"They had it at Target," Echoed Amanda.
For a moment Mike wondered if he should bother asking any more questions. His gut told him something was wrong -

-but, his gut also told him something else. Something deeper, wilder, more incredible, more immense, and more immediate then the hurricane that was now baring down on them. It told him that she was happy. And if she was happy, he was happy. And by her side, he was ready to stand in the eye of that cyclone, starring at whirling walls of shit that wrapped them up in bliss.
Mike finally put it all together and smiled back. Recognizing he had never taken part in a séance, let alone one meant to increase the household occupants to an amount suitable for connecting Colonel Mustard to the rope in the study, he calmly asked, "Amanda, what did you want to do today?"
"That’s the spirit, bub! Grab a couple candles and follow me!"
By the time she had finished her request the front door was swung open, Amanda was down the front steps, cutting through a wall of wind and rain, and Mike was just taking his first step, still catching up to the irony of her using the word "spirit" and what all of her words meant for today, tonight, and the fallout tomorrow.

Posted by PWalshMinor at 2:40 PM No comments: