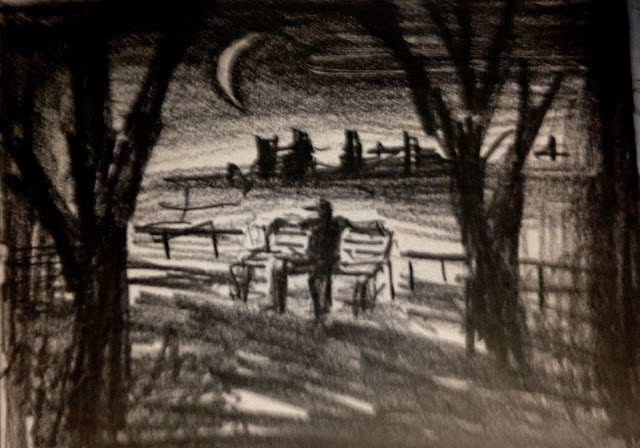 It started on a whim.

Okay, maybe a whim is not the best word for how everything started. To be clear, Ryan's actions have never been very whimsical. It started with a shrug, in an empty park, in a not so far away stopover town, on a plain looking bench, when fourteen months, twelve days, and eight hours ago Ryan took a stand…by taking a seat.
It was March when Ryan gave up. It wasn’t that the bench was particularly appealing, it was simply where he sat. The hours and minutes inched away until day one turned into two, then three gave way to four, five, and six.
It was after the first week that his friends began to talk. Echoing the typical feigned responses you might expect from acquaintances trying to fill the gaps of time before the inebriation took hold:

“He has been there a week.”

“Apparently, he shrugged and sat down....”
“I bet it’s over a girl.”
“He will be back here tomorrow.”
“Have you heard he stopped eating?”

The last one was true, it was almost two weeks until he even noticed he hadn’t eaten anything.
That continued until spring came, when he found he had been alone for a month; his friends and acquaintances dispersing among the more densely populated watering holes, where they might have greater opportunity to have their plumage talked about. By the time summer began, Ryan's benching had become a cautionary tale about those who could no longer hack the scene. Oddly, it was when the summer ended that his name found his way into back into the local vernacular. Coincidentally, this was around the same time much of the tourism started drying up and his neighborhood ran out of things to talk about.
By Halloween, groupchats saw a nearly four-hundred percent increase in the “shrugging guy” emoji. This can be directly attributed to the locals deciding that Ryan was a symbol for taking a stand, and the emoji served as a perfect textual abbreviation. By November, it was not uncommon to hear the phrase “idleing” or “benchwarming” being used in sidewalk banter, out-front some of the more frequented establishments, where an angry thirty-something with a mustache and mullet, or a near frozen girl in a white Hanes undershirt, short cut-off jeans, and pair of ankle boots, are not ready to leave said establishment, and are therefore, protesting like that park guy, Ray.

Ryan’s voluntary inactivity became a thing of legend when he made it through winter. Signaling this, newspaper articles with headlines that read "Nativity Scene" and "New Year Resolute" filled local coffee shops and fusion brunch bars. Those interested being part of the story, which was most the town at this point, shared digital updates under the hashtag "#APbenchwarmer".

Finally, Easter weekend, someone actually thought to ask, "Ryan, why are you doing this?" It stirred something in him…

Ryan sipped from a crinkled water bottle, while to his left, a twenty-year-old girl with wide-eyes and the start of an indiscriminate floral pattern sleeve tattoo, enthusiastically, scribbled his responses into moleskin notebook. Truthfully, a part of him wanted to impress her, but like with everyone he has met since reaching legendary status, that feeling was overcome by a much stronger feeling of disappointment.  Disappointment that she didn't laugh in his face, that she didn't cut him down and pull the curtain away from his entire protest. Disappointment that she was not disgusted by the theatrics of this entire novelty.
Hearing the slowing of her pencil, Ryan spoke up, "You know, I see 'em, I hear what they say. It's dumb. They're dumb. Really dumb." Ryan's body lurched forward, like he was adjusting the weight of his unworn baseball cap that was resting on his head. He continued, "For Christ sake, if everything is art, then isn't nothing art?" Shouldering the pivot and holding his head, his elbows dropped, landing firmly above his knees and pressed deep into his thighs, grinding the unused muscle, and softened sinew.
The scratching of paper sped up and it was making Ryan sick. It dried his throat, tickling the knot resting near his Adam's apple. He was tired of fighting. It is why he shrugged and sat down in the first place. Only now his protest is no longer his.

When he rode the wave, it pushed him to shore, when he fought the current, it pummeled him...

...the difference is that the air tastes so much sweeter when you fight for it.

On a bench, in a recently crowded park, in not so far away stopover town, at the end of a fourteen-month hiatus, a former benchwarmer, Ryan, had an epiphany...if we protest everything maybe living our lives to the fullest is the greatest protest we can mount?

It was time Ryan mounted one.

Ryan shook of the rust, leaned back, held up his head, and threw himself forward. There was no net for this feat and the only thing there to catch him was his own sheer will. Stomping directly onto the pins and needles that he had been collecting in his legs over the last several months, Ryan got up. 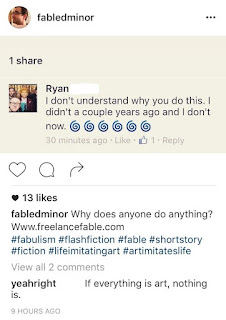 Posted by PWalshMinor at 6:15 PM No comments: