The Art of Making New Friends 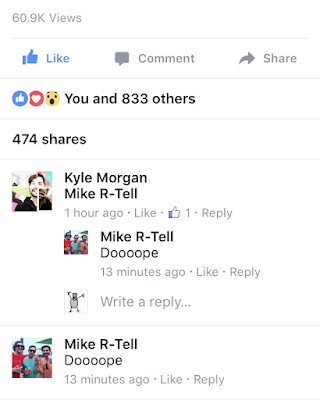 "This is only a test," Kyle considered, if only for a moment, the implications of revealing his discovery on Facebook. "Well, it's buried in the comments, no one will ever notice."

It had been nearly a year since Kyle had lunch with himself in a diner on the edge of Monmouth County and time itself. In the following weeks, he mostly busied himself learning the vernacular of his future self's time period.

Kyle can tell you, several months can be as disorienting as several years.

As days turned into weeks, they continued their collaboration, until the two were not only reacting together, but were actually creating schemes that they could hatch in unison. Synthesizing ideas that neither started nor ended at either of them, but rather burst into existence, like a pin-pricked balloon freeing helium back into the atmosphere.

When a plan came together, the two Kyle's would also then come together, around a common affirmation like, "dooope," or a similar manifestation from Kyle's own time period, like "niiice" or "dammmnnn," always said simultaneously.

For example, take his most recent scientific trial: solving the classic "two-timer date" conundrum. Rather than succumbing to the trope, as seen on television sitcoms like "Saved by the Bell" and "Mrs. Doubtfire," Kyle was able to send separate versions of himself to both a job interview and a Tinder date. Later, over matching orders of fusion tacos, those nearby would hear Kyle and his duplicate exclaim, "Dooope!" in a cacophony of disconnecting identical iphone6's and enthusiastic high-fives.

Until now, Kyle's experiments had been limited to these occasional bait-and-switch routines, used to dodge a random dinner bill or escape the cover at a local Asbury Park establishment. Be it heuristic inevitability, or just blind ambition, he was no longer satisfied by the small scheme, instead, he set his sights on a bigger landscape - the digital world. All he would need are subjects to test his hypothesis: That it is possible to recreate the conditions necessary to make copies of his friends.

Since his initial discovery, Kyle had spent most of his free time considering the implications of such power. Robots? Computers? These things are not the future.  We can't control something that can outlive us and grow beyond our sandbox. Something that will evolve motivations beyond our understanding. But replicates...human duplicates...with tangible wants and goals. They can be controlled.
Kyle imagined the possibilities...

...an entire crew of photographers ready to parade the deepest of underground scenes, a fam of writers that could tirelessly create content for digital click-bait mining facilities, a hive-mind who would always know:

how to give 'Gucci' things a title

AND make a 'Gucci' list that readers would affectionately call, "lit."

Armed with this thought, he tagged Mike, he pressed enter, and he waited for the replicates to respond.

About 45 minutes later, they did.

Kyle sat back, eyes focusing in on the screen in front of him, and said, "This isn't for science..."
A second Kyle, from somewhere in the same room responded, "...it's for Dem Boyz." 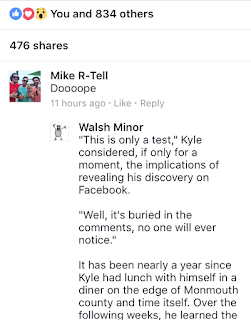 Posted by PWalshMinor at 3:42 PM No comments: