The Stillness in the Watercolor


“That’s...nice,” Ryan said focusing in on the painting hanging directly above the plasma television on the other side of the room.

Without looking, Nick plopped into an Eames lounge chair and corrected him, “That’s my art.”

The art in question was a large gaudy gold-framed watercolor pinched to a screw on the wall of Nick’s corner apartment. Ryan had been distracted by the piece of colorful decor for most of the night but had been unable to find the right moment to engage his host with any amount of ribbing. But, now that the hyper-violent motorcycle melodrama they had made a point to watch was rattling toward a close, there was a lull long enough to make his curiosity known. 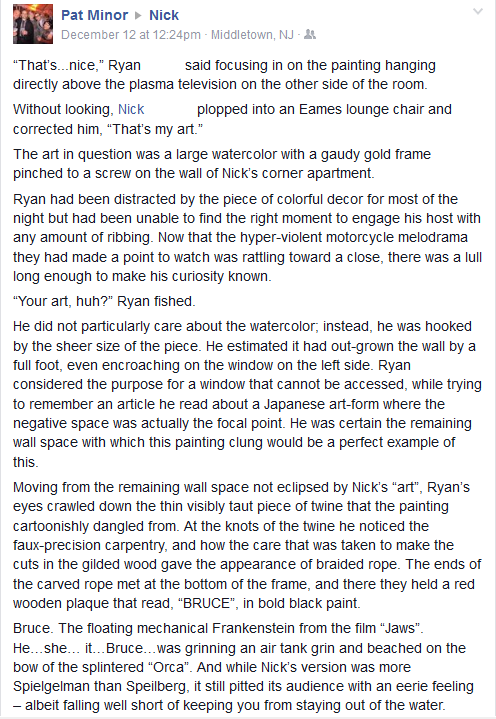 He did not particularly care about the watercolor, instead, he was hooked by the sheer size of the piece.  He estimated it had out-grown the wall by a full foot, even encroaching on the window on the left side.  Ryan considered the purpose for a window that cannot be accessed, while trying to remember an article he read about a Japanese art-form where the negative space was actually the focal point. He was certain the remaining wall space with which this painting clung would be a perfect example of this.

Moving from the remaining wall space not eclipsed by Nick’s “art”, Ryan’s eyes crawled down the thin visibly taut piece of twine that the painting cartoonishly dangled from. At the knots of the twine he noticed the faux-precision carpentry, and how the care that was taken to make the cuts in the gilded wood gave the appearance of braided rope.  The ends of the carved rope met at the bottom of the frame, and there they held a red wooden plaque, with single word written in dripped black paint.


Bruce. The floating mechanical Frankenstein from the film “Jaws”. He…she…it…Bruce…was grinning an air tank grin and beached on the bow of the splintered “Orca”.  And while Nick’s version was more Spielgelman than Speilberg, it still pitted its audience with an eerie feeling – albeit falling well short of keeping you from staying out of the water. 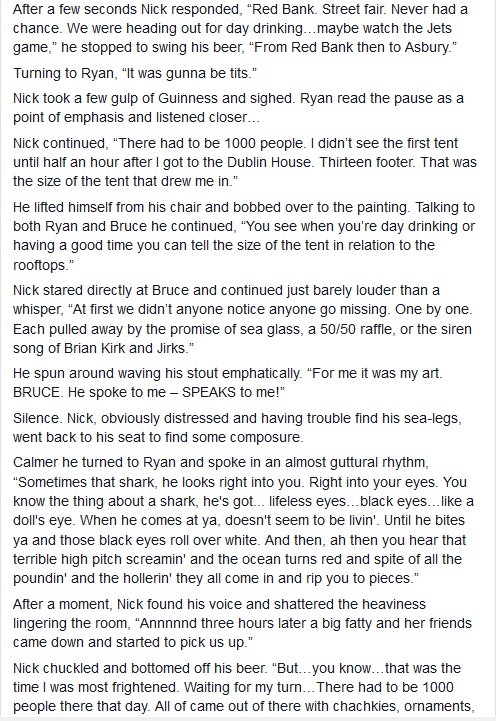 After a few seconds Nick responded, “Red Bank. Street fair. Never had a chance. We were heading out for day drinking…maybe watch the Jets game,” he stopped to swing his beer, “From Red Bank then to Asbury.”

Turning to Ryan, “It was gunna be tits.”

Nick took a few gulps of Guinness and sighed. Ryan read the pause as a point of emphasis and listened closer…

Nick continued, “There had to be 1000 people. I didn’t see the first tent until half an hour after I got to the Dublin House. Thirteen footer. That was the size of the tent that drew me in.”
He lifted himself from his chair and bobbed over to the painting. Talking to both Ryan and Bruce he continued, “You see when you’re day drinking or having a good time you can tell the size of the tent in relation to the rooftops.”

Nick stared directly at Bruce and continued just barely louder than a whisper, “At first we didn’t anyone notice anyone go missing. One by one. Each pulled away by the promise of sea glass, a 50/50 raffle, or the siren song of Brian Kirk and Jirks.”

He spun around waving his stout emphatically. “For me it was my art. BRUCE. He spoke to me – SPEAKS to me!”

Silence. Nick, obviously distressed and having trouble finding his sea-legs, went back to his seat to find some composure.

Calmer he turned to Ryan and spoke in an almost guttural rhythm, “Sometimes that shark, he looks right into you. Right into your eyes. You know the thing about a shark, he's got... lifeless eyes…black eyes…like a doll's eye. When he comes at ya, doesn't seem to be livin'. Until he bites ya and those black eyes roll over white. And then, ah then you hear that terrible high pitch screamin' and the ocean turns red and spite of all the poundin' and the hollerin' they all come in and rip you to pieces.”

After a moment, Nick found his voice and shattered the heaviness lingering the room, “Annnnnd three hours later a big fatty and her friends came down and started to pick us up.”

Nick chuckled and bottomed off his beer. “But…you know…that was the time I was most frightened. Waiting for my turn…There had to be 1000 people there that day. All came out of there with chachkies, ornaments, blankets, and photos. I came out with Bruce…this shark. Those vultures took the rest.”

He took his first sip of the now lukewarm beer he had been clenching for the entirety of the monologue.  He let the suds soak-in as a smile rose to the surface of his face, the wispy color-splashed image of Bruce smiled back as if to agree with what Ryan was thinking.

“Nick, I think you are going to need a bigger wall.” 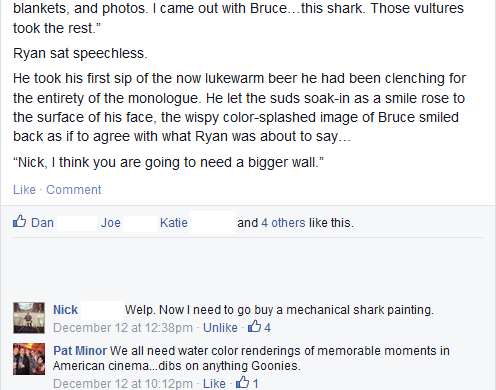 Posted by PWalshMinor at 1:56 PM No comments: